Since my initial post regarding the wish granted by https://www.raysofsunshine.org.uk
Herbie has literally spent every day playing happily on his “treehouse”.  It has been wonderful to see the whole family enjoying it in so many ways from the obvious up the ladder & down the slide with a shriek to movie madness with the film of the moment for Herb, Moshi Movie on the ipad with a few cushions and an Easter egg! Sarah, one of his brilliant community nurses, even let him have his iv meds up there on Monday! As you can see this was met with great appreciation!

So when the rainbow hammock arrived in the post, all the way from France, a fact that thrilled Herbie, and the heavens opened it was a disappointment. Looks like we will need to wait until we get back from GOS at the weekend before it can be tested. It looks fab though. 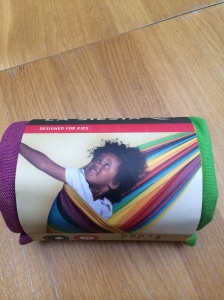 So on a different note my birthday is fast approaching and I will be spending it in a hospital ward in Great Ormond Street, #anotherrubbishbirthdayforthetaylors . Over 6 years ago a group of lovely friends clubbed together and purchased a ring from Nelle & Lizzy ( http://www.nelleandlizzy.com ) to celebrate the birth of Rufus and what we all thought was the completion of my family! It was a three band Russian wedding ring with Lily, Kitty & Rufus stamped on each band. I have treasured it since the moment I received it and rarely take it off but in the last year I have been more than a little concerned about the lack of Herbie’s name. I know it’s so silly but honestly it has kept me awake at night! So Dan agreed we needed an addition! The problem was that they didn’t make 4 band rings and I didn’t want to replace the original. Anyway, we ordered a double band…one has Herbie & Dan on it and the other says “love you to the moon and back”. It finally arrived this week, an early birthday gift and I LOVE IT! I can go to transplant knowing my whole family is represented on my finger. The £18.95 customs fee was a sting but couldn’t dampen my excitement!

We also had another pre BMT test this week. Audiology to check his baseline hearing.
Herbie was not impressed that the person doing the test thought he was a girl and decide to be a stroppy patient! Oops! 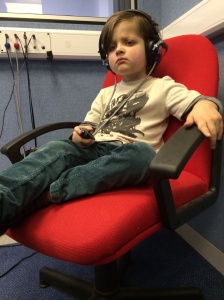 Eventually he co-operated and we were out of the JR In Oxford in record time with news that his hearing was totally normal. Yippee, good news after so much iv amikacin last year and this!

So tonight I am reflecting on my day with Herbie as tomorrow we head back to GOS to get Herbie’s peg inserted and for Rufus to have his HTA assessment. That precious boy really is amazing. As we drove to collect his new moshi pj’s he selected tracks to listen to on the way.
http://m.youtube.com/watch?feature=kp&v=cuZo7pLnL7c
Noone’s gonna love you by Band of Horses

Followed by
http://m.youtube.com/watch?v=uAOR6ib95kQ
Dare by Gorillaz

He spent ages discussing the lyrics and pondering life in general. He seemed so grown up, older than his five years.

I read the transplant book to him when we got home, it suddenly seemed appropriate. It was just the two of us. Herbie was not happy about the Hickman Line replacing the PICC but I explained the positives. He was most concerned about the word chemotherapy, he knows that Daddy has had chemo to get rid of cancer before he was born. He cried when I told him he would be in isolation for a while and couldn’t see his brother and sister but it was brief and he asked “will you be there Mummy?” “You bet I will” was my reply and one that was followed by a huge hug and kisses all over my face! He then asks that I read the book for Rufus about being a donor. When I finished he said “blimey he’s not going to like that” and laughed…that’s my boy!

He was given a card later from the son of our close friends who recently finished 3 years of chemo / treatment for Leukaemia. Mr H & Herbie are alike in many ways, they both LOVE trains, their iPads and they are made of tough tough stuff.
Inside the card were two of Mr H’s Hickman line pouches. Suddenly the line wasn’t so scary.

Fundraising is still going well, £1140 at last count but there is still plenty of time to sponsor so hit the button below!

Oh and remember it’s still Primary Immune Deficiency awareness week. No idea what that means? I am sure you are not alone so take a moment to click the link below and educate yourself and spread the word. Some of my lovely friends on FB already have xxxx

So time to get some sleep…iv ambisome in the morning at 8am, goodbyes to the girls and heading to GOS straight afterwards. The adventure continues…and yes I’m getting more nervous by the day!

3 thoughts on “Rainbows, rings and ponderings…”