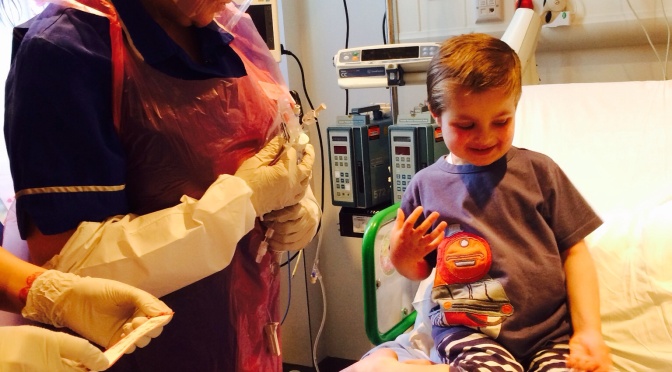 Today is T-7. It’s become apparent that the days are quite busy in BMT isolation. We have been on Yellow  precautions until now, this means that we can’t have visitors  in the room and Herbie can’t leave but as of tomorrow we go onto Green precautions which means that we have full days ahead of us!  We need to brush Herbie’s teeth 4 times a day, change his clothes and the two line bags every morning, bath him in special oil and then moisturise him all over. All food and drink intake must be logged and all out put (yep his wee & poo)  need collecting and will be taken off and measured. He needs weighing twice a day and his abdomen needs measuring.  These things are handed over to parents to do, it’s a good job as the nurses here are so busy and it’s rare to see them stopping for a minute.

The medicines he needs to take have really stepped up now and we are so glad we decided on the PEG because I really think he would have been crying about the amounts he has to take if they all had to go via his mouth. Additionally he can have meds through the PEG without being woken up which is fab.

Dan arrived back from his night at a local hotel with tales of a hearty breakfast and an encounter with an urban fox. It’s not Nor Lye but we still have foxes on the doorstep. He came with breakfast for me too so I left him to bath Herbie and headed to the parent room for a quick break. 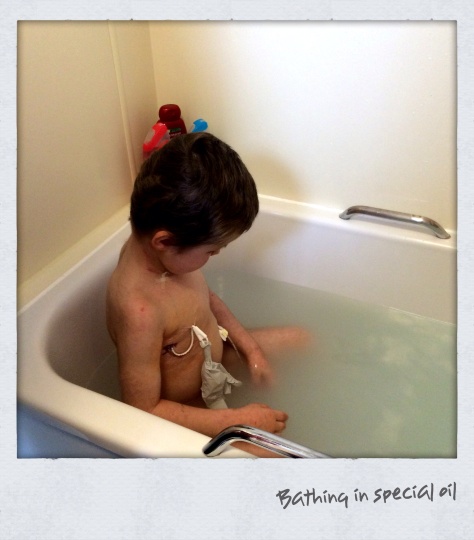 On my return a freshly washed Herb was grinning from ear to ear and ready for some Moshi madness. Auntie Lucy & Uncle Joffy, Jude & Charlie had given him some Moshi mash up cards and a collectors binder so we started on organising and sorting them. Two hours of pure Moshi heaven!

Herbie’s nurse today was Lisa and she had the delightful task of performing his first Hickman Line dressing change. Now any of Herbie’s community nurses would tell you how much he hates dressing changes. It took ages to stop him crying about the PICC line ones and even right up to the last change on Tuesday by Ele he was grumbling. So we knew that he would not be happy and we were right! After much shouting and protesting from Herbie, Lisa nipped out of the room to get some Zoff which helps remove the dressing more easily. Nipping out of an isolation room isn’t easy as there is a lock down hatch you need to enter between the ward and his room. 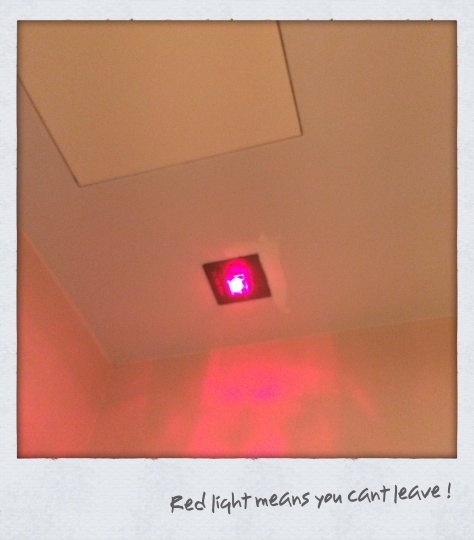 On entering and closing the door a red light flashes and you cannot exit the hatch until it stops, you must also wash and gel your hands on entering and leaving the ward/room. Nurses wear aprons and gloves which need changing every time they enter/leave the room too! So whilst this took place we had to calm Small down and as we have very quickly realised the easiest way is with a Moshi related reward. 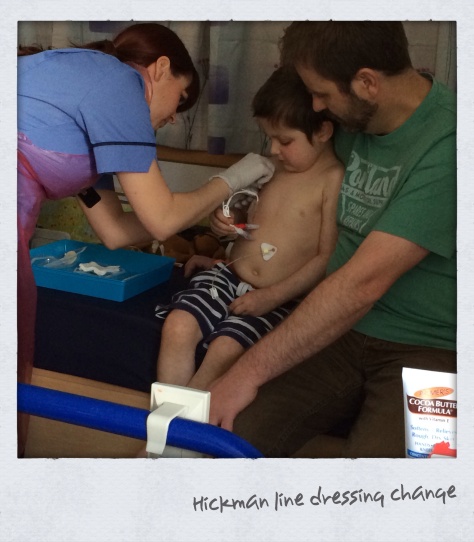 So with “visions of GOSHi Moshis'” dancing in his head on Lisa’s return we witnessed a calm and quick dressing change. Thank goodness it’s only once a week! 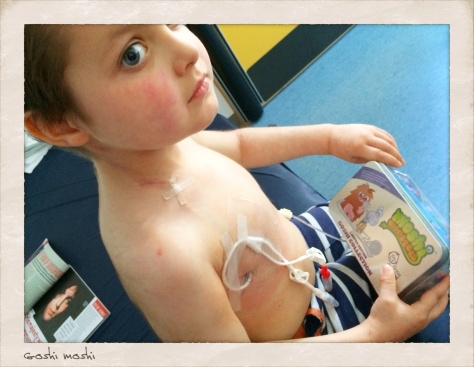 After this the teacher arrived for an hours schooling so Dan & I slipped out for a cup of tea and met up with the film crew for a catch up and also bumped into a few familiar faces racing around the wards, namely Paul Veys, Wasim Qasim & Jinuah, our BMT consultant, Immunology consultant & immunology nurse.
On our return we found a smiling Herbie who was thrilled to have beaten the teacher at a maths game! I know his outreach teacher & hospital school teacher won’t be surprised to hear that!
As we considered lunch the nurse arrived with his amikacin iv and then followed by the film crew with a radio mic as the doctors were doing ward rounds. Lunch was put on hold. We filmed the consult, the cameras can’t come in so it’s through the viewing window. We discussed the stopping of one of his drugs, rifampicin. Followed by his recent strange ‘crunching back’ reaction to ambisome but on the whole things were good.
Then as we considered lunch again the nurses arrived with today’s chemo! 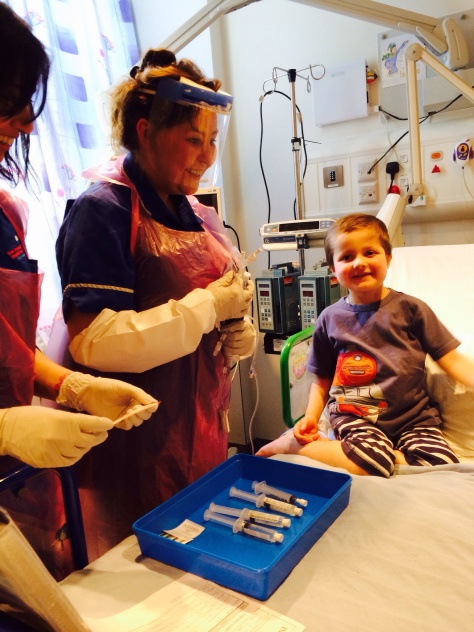 The Fludarabine is a well tolerated chemo and Herbie seems to ok on it. Phew! Others start on Sunday which might be different though.
When the chemo was finally finished we thought about lunch again, but the door opened and a student nurse arrived announcing we were to go for our ‘green talk’ with Nicky and she was there to play with Herbie.
On our return we had numerous FaceTime sessions with. Grandma & Grandma, Kitty, Lily, Ru, Mimi, Papa, Otis, Felix and Charlie and by then it was heading for 7.15pm so lunch was turning into dinner!
We received Herbie’s blood results which suggested a low Vitamin K and Dan laughed as I studied them against the normal range results. My blood info obsession has begun! 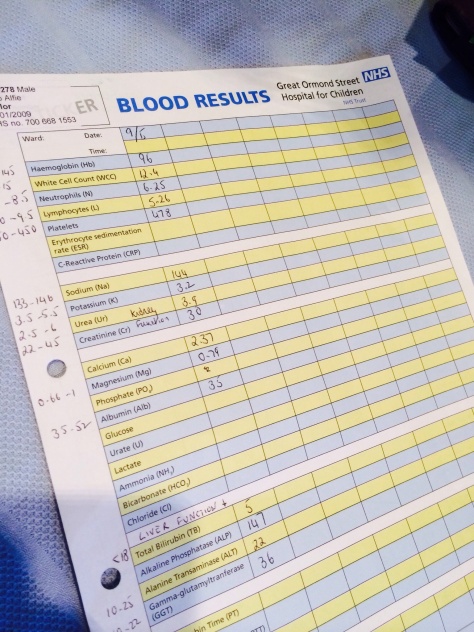 So day T-7 is over…day T-6 is on it’s way, with the promise of some lovely visitors, even if it is just through the viewing window! 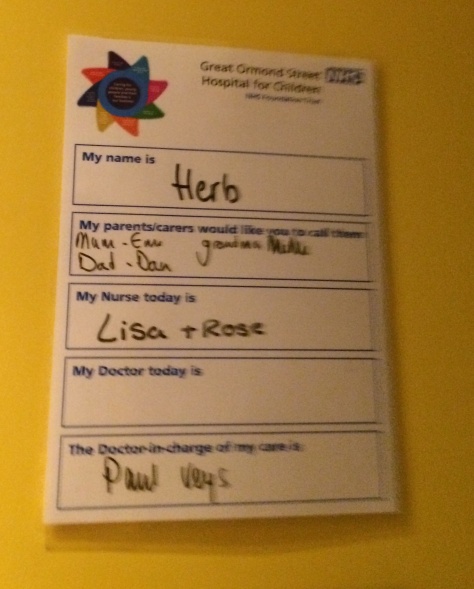 One thought on “No time for lunch…”