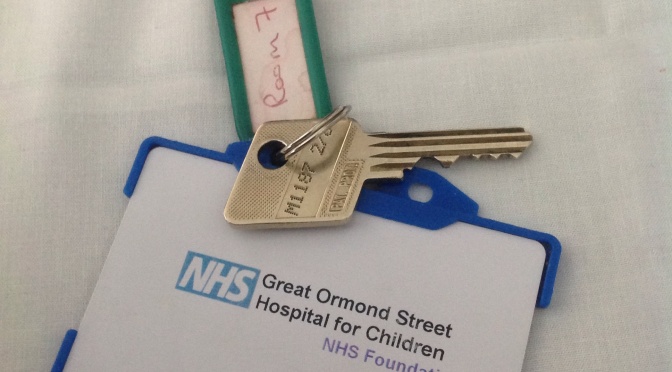 T+4. Today was four days post transplant. It was also consultants rounds. They do their rounds every Tuesday and Friday so we were keen to both see Paul Veys as I had missed him on Friday.

The day started late again, Herbie is seriously going to bed later and later meaning he sleeps in later too! He woke happy again and we were able to get him set up with his marmite toast and drink so he could get into the bath as quickly as possible.
As I made his bed I noticed a few little hairs on the pillow…perhaps the start of the hair loss?

The ward doctor popped in and declared there were no worries and she was pleased to see him looking so well.

Helen, the school teacher, arrived and we left Herbie to his session and headed to Starbucks for a cup of tea and then a brief shop in the square for essential supplies. We also booked Dan into a local hotel as it was becoming increasingly obvious that he wouldn’t get accommodation.
On our way back we stopped by the accommodation office, just to show face and low and behold! A room for the next few nights at least in the Italian building.

We returned to find Herbie wolfing back chicken , rice and carrots. Still in grand form.
The afternoon came and it was time for the amikacin finger prick to be take again. Much shouting and yelling ensued and finally they managed to catch him.
Herbie was most grumpy about it all but quite liked the blood left on his hands . 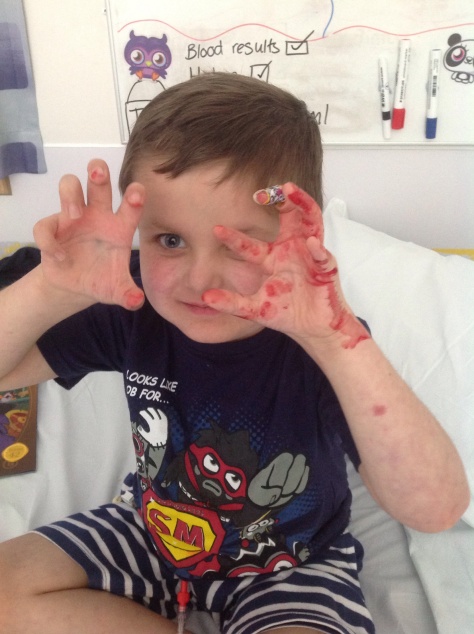 I’ve chatted to lots of other BMT parents today and heard great stories and not so great. The overwhelming thing was how lucky we were to get a sibling donor! In fact a donor at all.
I want people reading this to really think about whether they would be willing to save another person’s life? There are people out there, people’s children, auntie , uncles and they are waiting for someone like you to change their life.
I met someone today whose son has had a cord cell transplant today too.

Post arrived late today but it was worth the wait when Herbie ripped open a couple of cards from the lovely Libby and her family.

Then a small package from Sally with a happy smiley card and some modelling balloons. Thank you Sally x 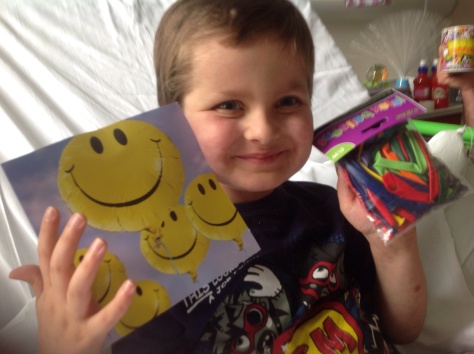 The afternoon passed by nicely and Paul Veys arrived with two other doctors to see Herbie.
We were told that so far the BMT was text book which was great. He also offered hope that the side effects may well not occur even.
Then we talked about Rufus and he had update news on the cells he gave. Apparently they had thought it looked good but the final cell count came in way above expectation for a child donor! Our special super hero has donated an excellent number of cells and this makes the outlook for Herbie even better! We were thrilled!

So all looking good.

Dan was thrilled that he met and chatted to MC Taylor last night AKA Hiss Golden Messenger.
Even more so when he replied to him to wish Herbie luck. 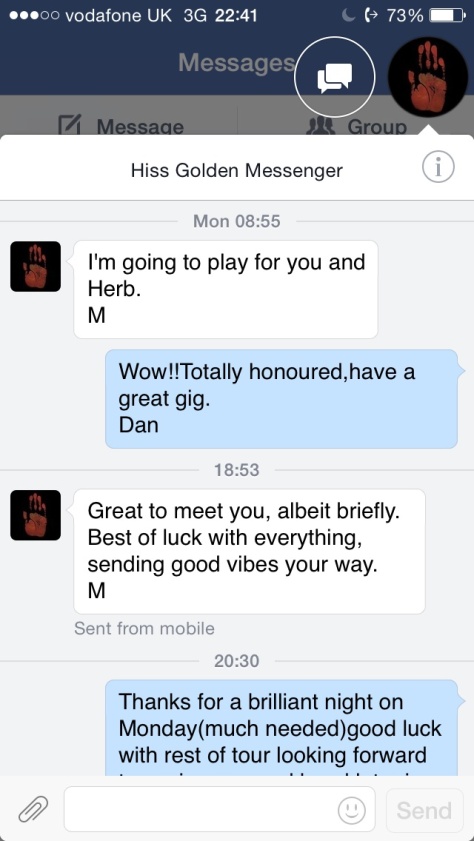 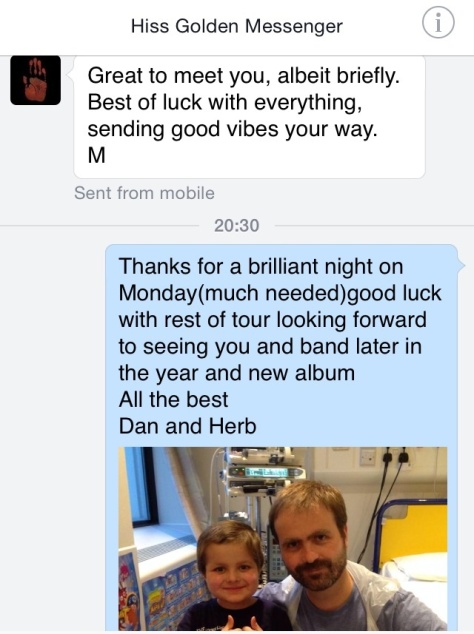 We got Herbie ready for bed and he started to complain that his mouth was sore. This was something we had been warned about and thought we had escaped. That said he was still eating Pom bear crisps!
So tomorrow we are half way to double figures post transplant. On Monday one of us heads home , day T+10. Time keeps racing on.