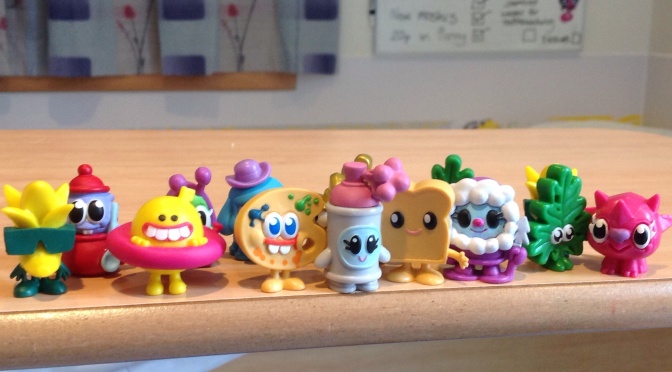 T+10! We are in double figures, ten days post transplant. 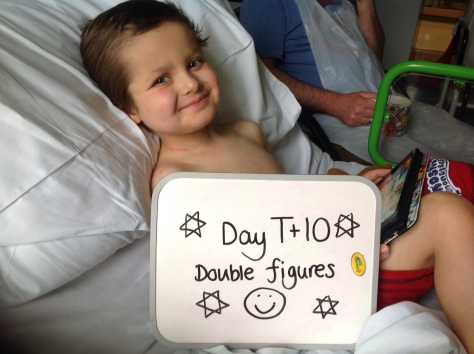 I woke around 6.15am to find paracetamol ready in the blue tray by Herbie’s bed and I knew he must have spiked again as he had done last night! I decided to think positively, antibiotics don’t change things dramatically in two doses so I had to be patient. I went back to sleep. Dan came in again whilst I was still in bed so I got myself moving and started on the list of jobs even though I was expecting another day like yesterday.

Thankfully the day went a little differently. For a start Herbie was sat up in bed asking for breakfast! He had a yogurt and a very small bowl of Coco pops but it was breakfast none the less. He said his throat still hurt a bit and luckily he’s now prescribed regular painkillers for it so I think that really helped.

He looked brighter and was giggly and happy to move which yesterday was a real no no. His fluid intake is still well below requirements so he needed fluids which annoyed him but thankfully his CEWS score were between 0-1 for the day, phew!

We also got him back into routine with his bath and moisturising etc this morning which was great and made us all feel better. His hair is falling out more and more, although when you look at him it’s really only noticeable in one place. 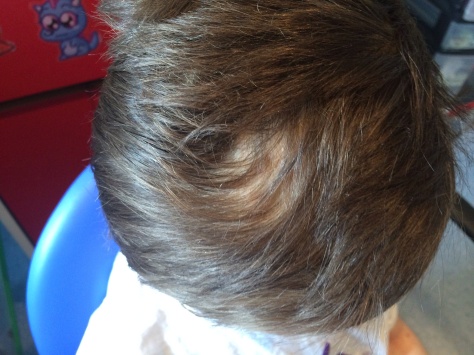 As the day progressed more and more hair seemed to come out and was itchy and irritating but he wouldn’t even contemplate having it cut when the nurse offered to do it! 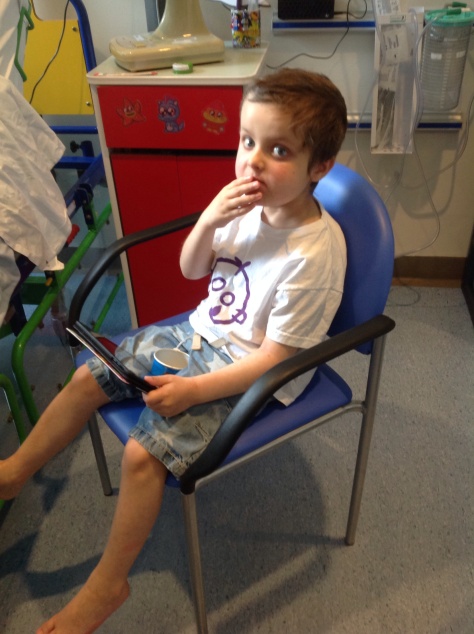 After an impromptu finger prick blood test which didn’t go down well, he spent the morning grazing on snacks etc which was great after yesterday and he also played his iPad again for the first time in 24 hours! He looked pale though and based on yesterday’s blood results we expected a blood transfusion.
It was a surprise when I saw the blood results to find the following…
HB 109 (well in range again?)
WCC 0.12
Neutrophils 0.07
Lymphocytes 0.02
Platelets 35
Holly was our nurse again today, she predicted yesterday that he would be at zero for neutrophils by Tuesday, looks like she may be right! She also said that they needed more blood to check the HB as it couldn’t be right. It wasn’t! It turned out to be 76 so he will be having a 3 hour blood transfusion this evening.

As the day moved on we realised the time was drawing closer for Dan to return home after his 3 weeks here. The other three children, although cared for brilliantly by their grandparents still need a little normality in their lives, Daddy was going home to give that and on Friday I too will be coming home after almost 4 weeks away. That will be with mixed emotions as it was with Dan today. We’ve made a little routine, a little hideaway in which to deal and cope with everything going on, Dan has to return to the real world now and leave his baby boy behind for a few days. I could see how tricky that was for him as the morning progressed and he gathered his things.

Herbie not only felt like a little bit of drinking and eating but he also decided to make a cardboard racing car from a kit given to him by Sam and Hannah on Friday. He enjoyed putting it together and it was lovely to see him back up and interested. 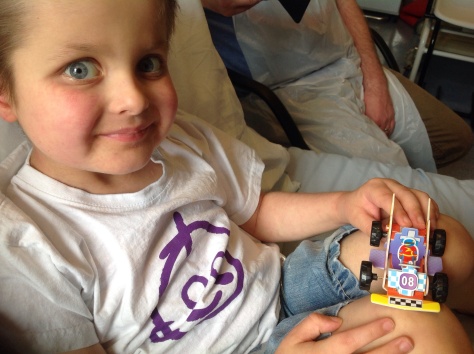 Herbie kept asking when Grandpa was coming to get Daddy. He wasn’t concerned about anything at that point but getting his new packs of the just released series 10 Moshi ‘s that Papa had purchased for him. When Grandpa arrived it appeared that Herbie inky had Moshi’s on his mind (although he did whisper to me, I’m really going to miss Daddy).
So the time had come, 3 speedy weeks almost done and Dan’s full time stint was over. It was a little emotional but we all hugged and said goodbye quickly so as not to prolong the agony.


To distract us from the hole Daddy left we had gifts to open!
First was the new Moshi’s from Papa 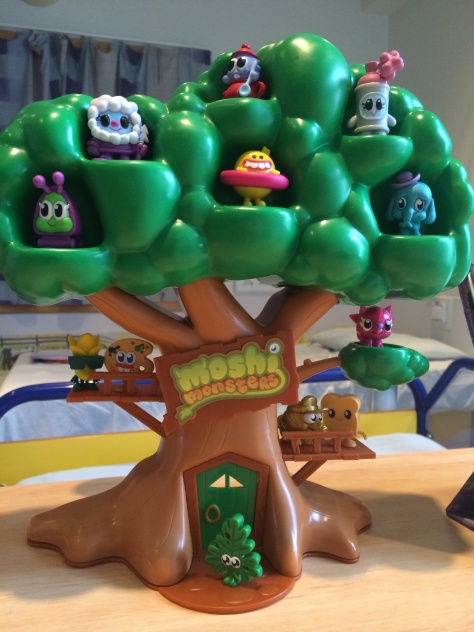 Which were a MASSIVE hit!
Then a package from Jo & Dave from their trip to New York & Boston. 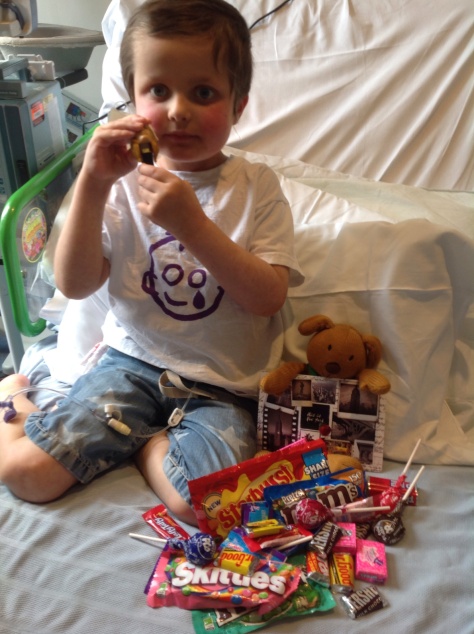 Yummy! He especially loved the PEZ dispenser …thanks guys!
I was also lucky enough to have a treat from them in the form of candles. They smell delicious! Cheers guys. 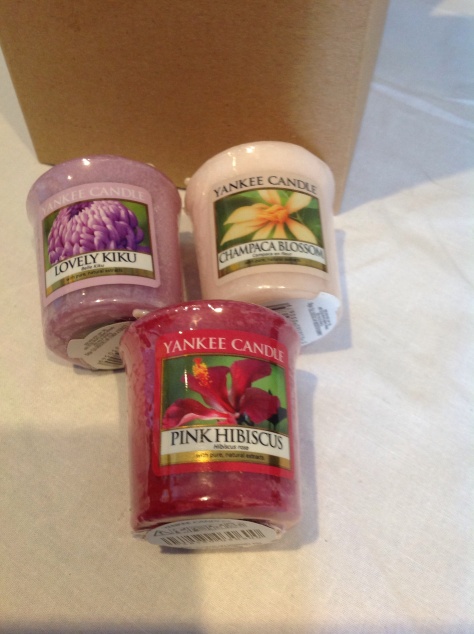 Jo’s thoughtful mum had also sent a gift for Herbie 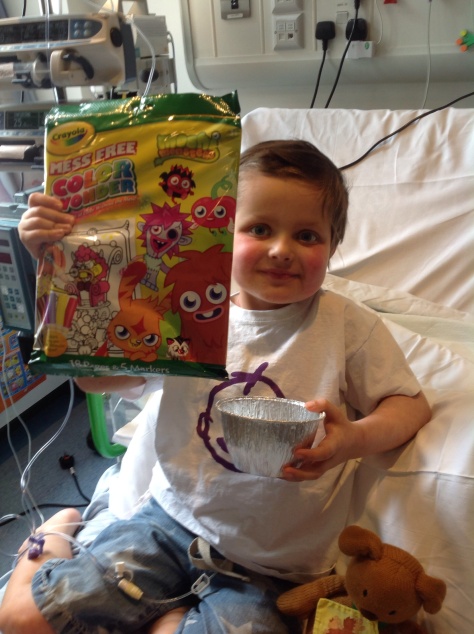 And it was Moshi themed so a huge hit!
Jo’s mum had also sent me a wonderful gift. Lots of pampering goodies , which were perfect but even more perfect the L’Occitane hand cream which the night shift nurses had been telling me to purchase only last night! Thank you so much Pat! 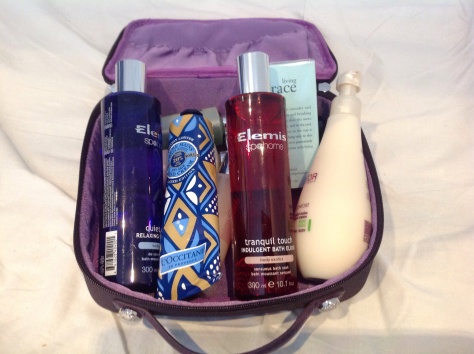 There was also another lovely card from Auntie Lucy and the crew with some Moshi Tattoos and yummy bits …oh and Herbie smacked the picture of Uncke Joffy’s behind as is tradition! 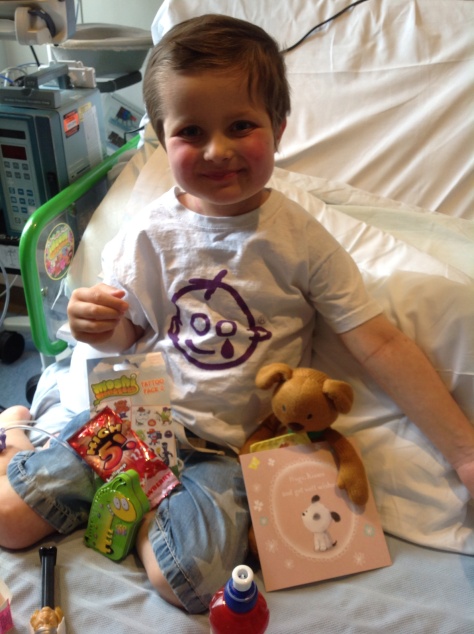 Herbie spent the afternoon watching TV and generally being quite happy and content but as the night shift came on he began to look tired. The day shift did a temperature and he was still ok but creeping up. By 10pm he was 38.8, he’d managed a good 15-16 hours without a fever. I was sad that he had another but in all honesty not surprised! The Vancomycin that he started and had finger prick levels for this morning, came back low so his dose was increased.

We are currently awaiting his blood to come up to the ward for his transfusion and his temperature to go down now the paracetamol is on board. He’s fast asleep oblivious of the worry he puts us through and tonight my partner in crime is back in the Shire so I’m here alone with cups of tea and the iPad for company!

Dan sent me a picture of a letter we got today saying that Herbie had been nominated for a Well Child award! We were so happy for him to be nominated, how lovely!

So I’m signing off now, clearer mind than yesterday, rain clouds moved on, blue skies taking their place, taking each day as it comes and seeing the bigger picture…a well Herbie and a family reunion!
Day T+11 tomorrow and my mum is coming, yippee! Night all.