T13… I’ll be glad to see the back of today. I woke at 4am to the sound of the fan whirring. I hadn’t put it on, Herbie can’t reach it so that meant one thing, Herbie had spiked and the nurse had put it on to cool him. That’s exactly what happened. My dreams of 24 hours fever free were dashed and to add insult to injury he was 39.5 again by 6am. I couldn’t believe it.

He was very groggy after such a high temperature and slept.
The doctor popped in and told me that the new antibiotics were clearly not doing anything as he was still spiking. I asked what would happen if he continued and she said usually a brain scan and lumbar puncture but that he was too well, alert and not vomiting. The day seemed to be starting badly! Rehka was our nurse again , one of Herbie’s favourites , and she came in to do the hair shaving for us. I secretly wanted to cry before she even started but I knew that due to all of the hair he had lost overnight, I had to encourage it.

Rehka began and his face was so sad.

Finally the deed was done. I was heartbroken even though I know from Dan’s and Hugo’s experiences that it will be back soon
, his hair really was so much part of his character.
Now he looks all huge eyes and the back of his head is flatter than it should be! He actually looks ill. 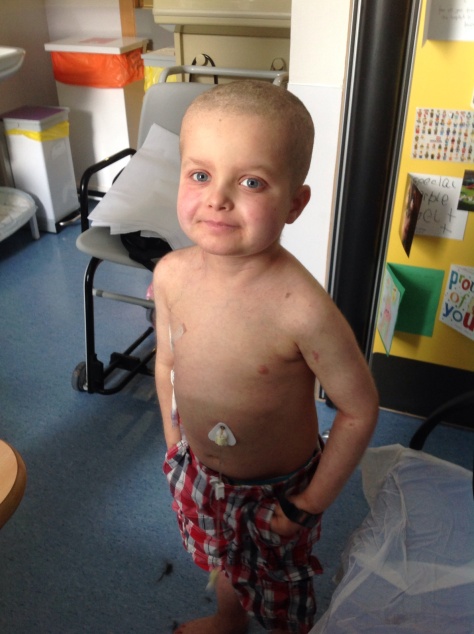 Don’t be deceived by the picture above, after it was taken he went into the bathroom for his bath, sat on the edge of the toilet seat and cried. He cried for his hair, he made me cry too. Definitely a real low point of the day. I tried to jolly him along in the bath with games and jokes etc but it was clear that he was exhausted and wanted to go back to bed. I changed his bedding as it was so hairy and he snuggled into bed. Before we knew it Rehka was back to change the Hickman Line dressing, a weekly occurrence and to do a finger prick for drug levels in the blood. He wasn’t happy but clearly lacked the energy required for a full blown complaint.
We tucked him up in bed and he slept. He had a 250ml water bolus through his PEG again as his fluid intake is down but he actually began drinking more again today so he only needed the one.
I drank a lot of tea and played candy crush and watched Small sleep and willed him not to spike a temperature again. The post arrived. Apparently the post guy now just says “all for
Herbie
Baby Arthur was busy buying, wrapping, writing and posting and Herbie loved it, thanks Arthur, Mand, Issy & gem x


Mrs J sent parcels for Herbie, me and a small gift for Dan. The magazine was perfect Mrs J and kept me going on a long lonely afternoon.
Caroline & Mamood sent the above and I later heard that Ru & the girls all had something from them too. Thank you x
They also sent me yummy hand cream. 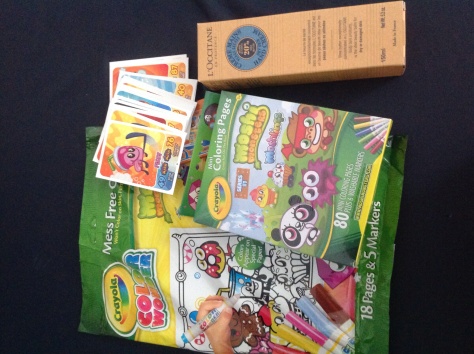 Besties Lily & Sam sent lovely package and great gifts too. He was also thrilled with another letter from Hope. 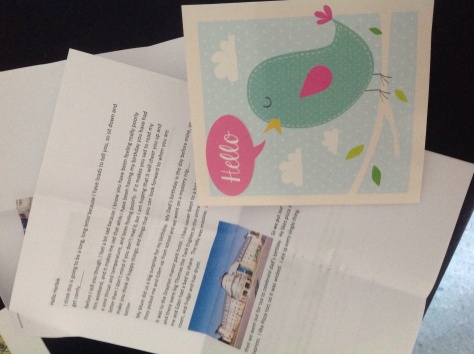 He says “Hope, I have been to Thomas Land too but I went at Christmas time. It is great there. I’m glad you had a good birthday. ”
I got a gift too from an unknown source! If this was you please tell me as I’d love to thank you personally!

Herbie really didn’t do much all day but sleep. I collected his blood results and as I was told they had jumped down again.

Platelets again tonight, blood transfusion probably by Sunday.
Will N’s and L’s ever get to zero?

Today really has been a pretty rotten one. We could have a long while to go in this rubbish phase but I hope we can pull through sooner. I had to get out for fresh air this evening. It’s very hard to stay in one room all day staring at your poor baby sleeping. Thankfully I drank so much tea I ran out of tea bags and had an excuse to pop out & get more!
Cobwebs cleared I returned back to my room. Herbie was hot, 37.9 and by the time night shift came on he was very hot. I was sad, for the umpteenth time.

Spent time on the phone and FaceTime to the kids before shutting down the lights and settling down to write this.

The platelets are just going up. He’s still only 37 but can get hot!

7 thoughts on “Like a non-swimmer in a rough sea”