Herbie woke late today. Dan was advised to let him sleep so he did. When he finally woke he was cool and able to do the daily drill, bath, weight, measurements and moisturising and even have some breakfast.
His skin was a little dry in the places it had been itchy and more of his hair came out in the bath but he was good.

He had at this point managed to go 30 hours fever free! Whoop whoop!

Obviously no fever means that he will be more alert and able to do more so finally after a week of having it on his daily ‘to do list’ that we write each evening together (Just to give some rough structure to his day) , Herbie & Daddy managed to start and even finish the Muppets jigsaw puzzle! 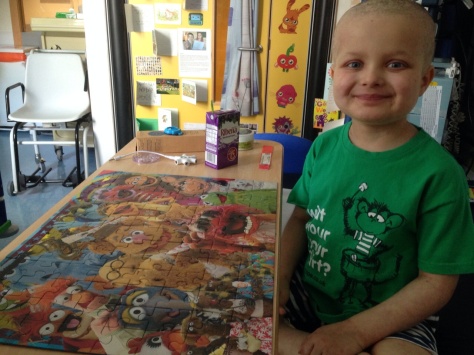 Things were definitely more promising than they had been earlier in the week.

Maxine was his nurse today and she is one of the more senior nurses on Robin Ward. One thing they are all good at but Maxine is excellent at is telling you which drug is being given and over how long. We both really like to know where we are at in his drug schedule as there are so many!
Herbie would also need platelets later on today as his levels had slipped again.

Temperature, SATs and blood pressure all behaved during the day and he was even eating some meals and drinking. All excellent news. He still remained quieter than usual but it’s important to remind yourself again that you are going through an incredibly massive procedure, there will be good and there will be bad days. Big power struggles will be going on inside his little body. Ru’s cells will be trying to oust Herbie’s and even with a 10/10 match the host cells won’t take it lying down!

As you know I left to return to the Shire for the first time since May 6th. It was an incredibly emotional wrench to leave Herbie at this time but it’s also an incredible heartbreak to be away from my other three babies. I went to bed with a splitting headache last night & woke with one too. I dreamt all sorts of strange dreams and realised this morning just how exhausted I was!
I’ve had a good day with the other three kids, they have spent vouchers that people have sent for books, WHsmiths etc today and we went to a cafe and then chose nice food for dinner. Our lovely family friends Dave & Christine also gave the children money to go to The Shake Shop, the children decided to save it for next weekend as it spreads out the fun and gives them things to look forward to whilst I am away next week. We finished the evening watching Swallows & Amazons on DVD, thanks to the lovely Em, Jonny ,Stan & Jed. Finally we settled down to read together, we chose an old fave of my childhood, Charlotte Sometimes. Kitty had purchased it today thanks to Gay & Colin.

The blood results were eagerly awaited today after yesterday’s consultant round and the GCSF that was given to boost the production of neutrophils.

HB 83 (probably looking at a transfusion in the next day or so)
WCC 1.23
Neutrophils 1.05
Lymphocytes 0.06
Platelets 27 (platelet transfusion already scheduled)

A big jump for WCC & neutrophils, this will no doubt drop tomorrow so we can only be tentatively excited but they have all really jumped up! No GCSF tonight so we will see how it goes.

The dr came in and was really happy with how things were, especially the lack of fevers. So that too was positive news.
She expected to see his CRP reduce now.
CRP is the test to show inflammation in the body which can be caused by infection. The numbers increase as the inflammation/ infection progresses. It was around 147 last time it was done I think.

Herbie slept after his lunch and then woke to watch TV etc.
Then he had a Hotdog for tea and watched some Adventure Time on TV before it was time for his Platelets and milk feed.

Finally it was bed time for Herbie. Fingers crossed that T+16 continues to go our way. We always remember that Nikki told us , for every good day it means one less bad.
Today just gave us one more mark on the plus side! I’ll leave the blog today with a quote from the wonderful Maya Angelou

Courage is the most important of all the virtues, because without courage you can’t practice any other virtue consistently.

Today gives us courage to go forward to tomorrow x

One thought on “Courage is the most important of all virtues”