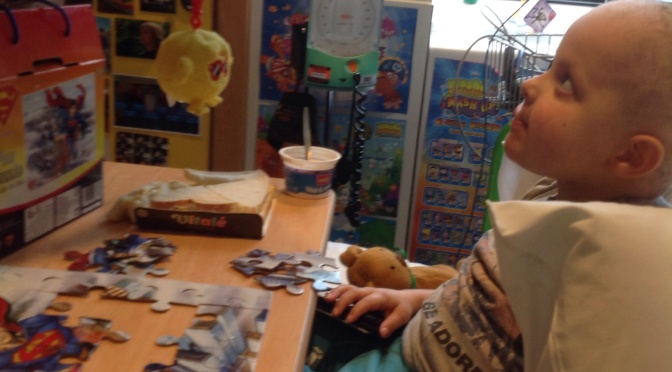 T+19…
This morning we both rose a little earlier which was good as we were ahead of the game in terms of bath, weight etc.
Herbie was in good spirits and asked for breakfast again and so I headed off to get him the requested bowl of Rice Krispies from the BMT kitchen. I’m not sure if I’ve mentioned it before but to get to the kitchen I have to leave our ward, Robin Ward, and go into the adjacent BMT ward, Fox Ward. As I walk past the big windows of the isolation rooms I am always looking at those with the curtains still drawn, wondering if the child is having a bad day, hoping they are alright. I also notice the line of bald heads, sounds odd but obviously everyone in the BMT ward has no hair. Our ward only funds 3 BMT beds the other beds are for immunology patients so it doesn’t have the same impact walking through here.

I returned to find Helena, the cleaner, in our room smiling. She said “such a polite and happy boy, always smiling, always saying hello to me”. Herbie really likes her.

Post arrived early at number 2 Robin Ward today and there was much excitement.
First a Lego Activity set from Mark & Amanda and the boys. He was thrilled to have his own Lego pens. Thank you so much x

A selection of Moshi wrapped parcels from Steph & Kim caused more excitement and soon a haul of loot was unwrapped and the smile was wide! Thank you lovely friends for all of this and mine and the things that you sent to the others today xxxx

Finally news and gifts from his class and teacher, the letter took pride of place on the wall. Thank you so much.

Herbie insisted we made the small clay Moshi as soon as possible so we did it there and then! 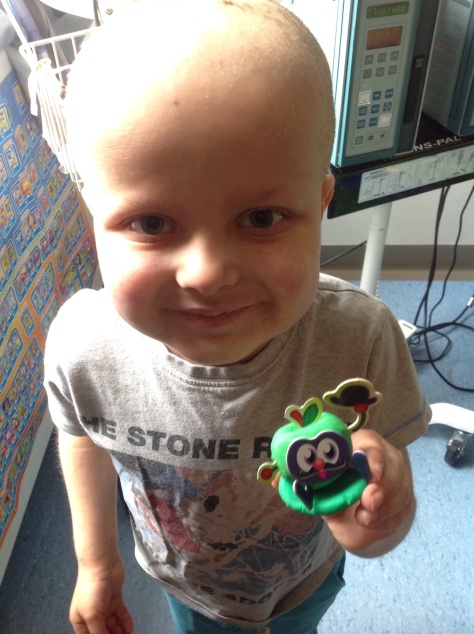 We decided to do a puzzle after the clay model, Herbie chose a Superman one in our box of goodies. Before we could finish it Helen, the teacher , arrived. After yesterday she did what all good teachers do, she put out the bait and reeled him in ASAP.
The laptop opened and via webcam they watched the baby chicks in the incubator back in the hospital school room. Then footage of two hatching a few hours previously. I slipped away unnoticed to get fresh air.

On my return I was told how well he was doing with his reading and that a superhero film was underway but I wasn’t allowed to see it until general release!

Lunch came and we multi tasked, eating, watching TV and continuing the puzzle we started before Helen arrived. 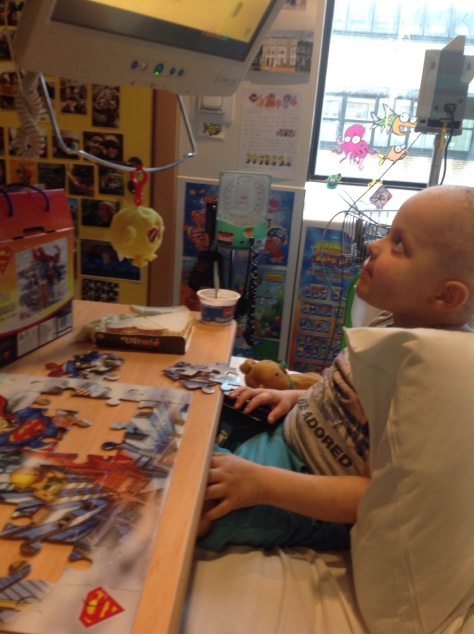 Herbie continues to eat and drink much better than last week but still not up to the required target levels. He needs to take onboard 1.5 litres of fluid a day, they include iv’s in this so basically he needs to physically drink 1 litre. By lunchtime he had had around 400mls.

Amy, the Robin/Fox play specialist , had been trying to come and play for over a week but finally overcame all obstacles and made it. She came bearing gifts, unlike the play specialists in other wards once an item has been given to a child it must stay there to avoid cross contamination. She came with an LED colour changing Moshi light which she gave him much to his delight!

She also came with Disney Hama Beads so I disappeared out again, clutching a COSTA gift card, thank you Ann x

The heavens opened as I dashed back along the road to the hospital. I arrived in the parents kitchen to make tea and met a mum who is still in hospital with her 3 year old, 7 months ago he actually had his BMT but complications mean they are still here. She told me that oddly the rain had lifted her and made her want to run into Queens square & get soaked. I told her to go for it but she later told me she hadn’t the courage.
I thought a lot about her this evening, coming here for hopefully 8 weeks but still being here 7 months later… 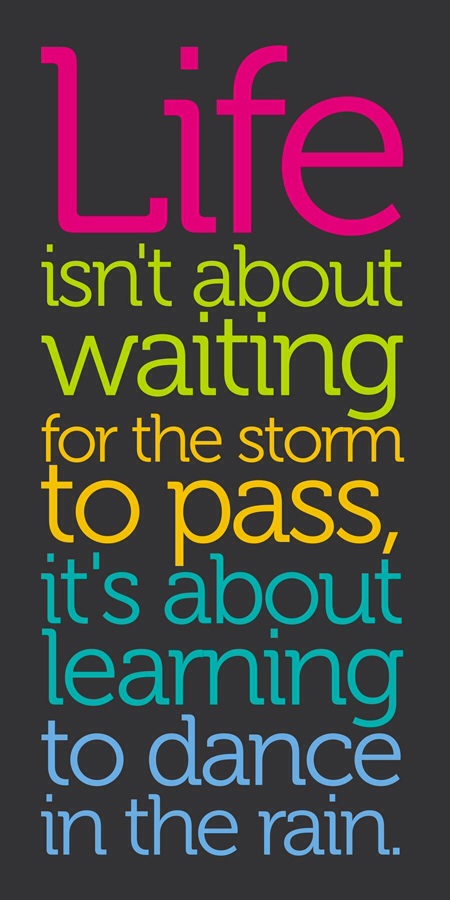 Herbie had enjoyed his Hama beads with Amy so once she had gone we continued doing them whilst listening to an eclectic mix of music. We sang, drank tea & juice and laughed too. A lovely few hours. 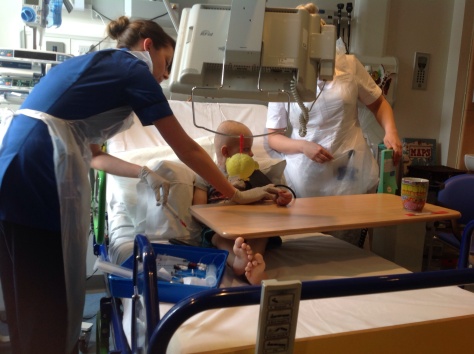 Holly and student nurse Nicola were both in and out doing BP and other obs during the afternoon. We had less iv’s today though as the three times a day, hour long per infusion acyclovir is no longer needed, just in oral form now!

The doctor arrived with little to say and finally, after repeat bloods were ordered due to clotting of the morning sample, we received the blood results, all a little strange!

Neutrophils have risen sharply but he did have GC-SF last night.

Hayley arrived (night shift) and Holly and Nicola (day shift) went home. Dinner was all eaten and Herbie was sleepy.

I went to make tea to find the kitchen closed. Turns out someone on the ward has Noro virus,,,!
Thankfully Hayley got me one.
I waited for the kitchen to reopen for the last cup of tea of the night. All was good after that and peace reigned!

Tomorrow sees us entering the twenties…t+20!!

One thought on “Did someone say rain?”