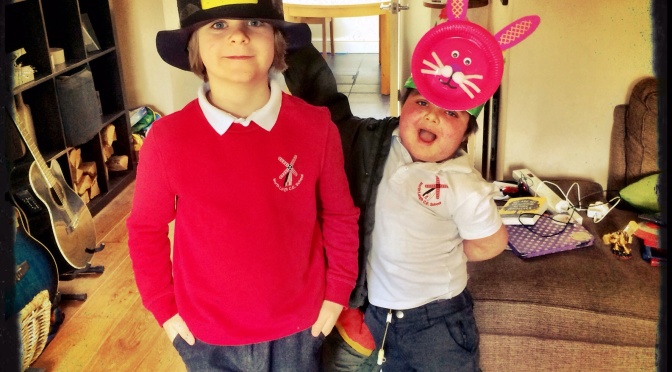 So it appears that my posts are like buses! You wait for ages and then two in one week! I realised that I missed out a few things in the last blog that I had wanted to talk about and also an update on Herbie is probably a good idea too. On Thursday I woke to a small face staring down at me  and a voice saying  “I want to go back to school, I feel better now.” We had agreed he wouldn’t go back despite him feeling back to normal but he was having none of it. Dressed for school and insistent how could we say no?  So normal service resumed. I went to the supermarket to get a few things and suddenly felt quite anxious that I was unable to get a signal on my phone. What if the school needed me? What if he got unwell? What if? I needn’t have worried. When I arrived at school at 11.55am he was there, beaming and full of beans. I had a full dissection of his morning and as he sat on the sofa drinking his chocolate milk and eating pretzels he piped up with ‘it’s Thursday isn’t it? Yippee! Fish and chip day!” I was so happy 🙂

Friday was a half day at school for the younger two, ending with an Easter bonnet/Hat parade. Herbie enjoyed creating his hat with big sister Lily and wore it with pride. The day just got better and better with a lovely bag of sweet treats from best buddies Lily & Sam in his draw and then he was chosen as star of the week which meant he got to bring the class bear home for the holidays. I thought he might burst with happiness! 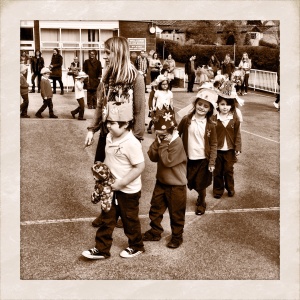 We went back at 1pm for the parade and Herbie ran back into his classroom. He came out moments later leading his class , as star of the week, in the parade. His happiness evident. What a great end to his term! Today he has been totally on form, eating, drinking, playing & happy.

In other news, the BBC Documentary series about Great Ormond Street is closer to airing which means things are stepping up a gear. Catey and Hiral arrived with our footage. We haven’t seen the entire episode as we are not allowed to see the other featured children. As you can imagine we are also not allowed to talk about what is in the programme but I can say two things. I needed tissues to watch it and we are very happy with our representation. I hope that it will be watched by many ( I will post as soon as I know the exact air date) and  that it will encourage people to join the Bone Marrow Donor register and potentially save the life of somebody that finds themselves in a life threatening situation. I also hope that the immunology and BMT teams will be seen for the amazing work they do and the difficult decisions that they are faced with. Parents are hoping that they have every answer but with most PIDS things aren’t that simple. This can be frustrating for the parents but also equally frustrating for the medical teams whose sole purpose is to save lives. So many PIDS are newly discovered, extremely rare and outcomes are hard to predict. The GOSH publicity department have been in touch with us about publicity surrounding the episode. It’s going to be an exciting and strange time.

Herbie asked me about the blog today. He said “if you email the blog to my doctors then they wouldn’t need to see me anymore because they could just read how I am ” It made me laugh that he sees life so simply when his is often so complicated. One thing I have noticed is that memories of transplant are already fading and selective for him. He remembers some things so clearly and fondly. Certain nurses, special times when he got to do something fun. I’m so happy that he is forgetting the less happy times. The only thing he often remembers with a grimace is the weekly NPA “it was every Monday and I HATED IT!”

So we are ready to enjoy the Easter break, despite two days in the JR next week for IVIG therapy and Pamidronate and then the following week a day in London at GOSH. Let’s hope things are back on the straight and narrow for a while.  ( but don’t hold your breath 😉)

4 thoughts on “Oh and another thing…”