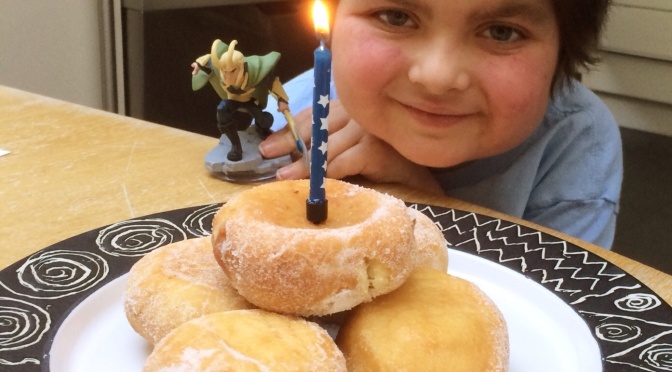 I must apologise for the lengthy gaps in my blog posts but really I feel the need to write as and when I have enough to tell you.  Our days have ticked by quite happily. Herbie continues to go to school each morning and is managing it well. When he returns home he spends time resting on the sofa , either chatting about his day or playing on his ipad or the X-box. He looks forward to the others returning from school just after 3pm  and can often be found in the playground trying to get back into his classroom whilst we wait for Rufus to come out. We tried since our last GOSH appointment to get him eating again. It’s so difficult as you can’t force someone to eat, you can only really encourage or tempt them. Breakfast was a complete no go about 6 weeks ago but then he started asking for a yogurt. We had a few weeks of yogurts and then he added in Cheerios (sometimes with milk, sometimes without!) . We started sending yogurts and Cheerios to school and also prawn cocktail crisps which he is obsessed with still. Some days his eating habits remind me of a toddler, he fills up and then isn’t hungry the following day. So according to our scales and the scales at the JR his weight appeared to stabilise at 24.4 which is stil 2.2kg  heavier than when he came out of transplant 10 months ago. So we felt quite happy that gut GVHD wasn’t an issue. So I guess the majority of our news this post concerns ‘milestones’. The first was my birthday. Last year I celebrated it at Great Ormond Street in Room 2 on Robin Ward. Herbie had his peg inserted the day before and had to stay overnight.  This year I was home with my lovely family, no impending BMT, surrounded by the people I love.

A week later we were looking forward to a trip to London to see Count Arthur Strong…we never made it though, the night before Herbie’s PEG blocked almost a year after it was inserted. The blockage, caused by a different magnesium tablet that went a little gloopy when dissolved, stayed for 12 hours and it really looked like the end of the PEG was close to hand. Herbie took his 8am meds by mouth and it was a struggle. Seriously the PEG was the best pre BMT choice we made.

Thankfully it did unblock before the 3pm meds but sadly not soon enough to make Count Arthur Strong.

Then the biggest milestone of all arrived…one year since transplant! May 16th 2015, we found ourselves deep in thought about how far we had come and how far we still had to go. A year ago we had no guarantees of celebrating this milestone, no promises of bringing our boy home  just percentages and hopes and dreams. Most of all though we had trust and faith. Trust in the hospital staff that this was the right course of action and worth the risks involved. Faith in our boy to put up the best fight he could, faith in ourselves that we would stay strong and try to keep ourselves as positive as the situation would allow. So where do we find ourselves? We currently have a boy who is still 100% engrafted with Ru’s cells, a boy back at school part time but soon to be full time, a boy who has a future . Yes we still have a Hickman line and a PEG which we thought we would have said goodbye to by now. Yes we are still on ciclosporin , immune supressant, and steroids…as well as a shed load of other meds and sometimes it’s frustrating but we’ve got our boy and for that we are grateful.

We marked the day with balloons, cards and small gifts and Herbie requested custard donuts as a cake although he didn’t actually eat much of one. 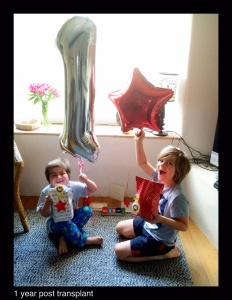 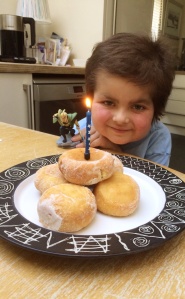 The day before the milestone Herbie & I went to my school to judge an art competition on the GOSH fundraising Peter Pan Day. The school raised over £300 for the hospital and the kids and staff looked fab. Herbie adored being a judge and leapt in the air when the final amount raised was announced.

Many of you may be wondering , like us, when the TV programme will be shown that Herbie’s story is featured in. As of today , Monday 25th May, I still don’t have a date to share. Be assured that I will let everyone know when it’s on. I’ve done a few phone interviews for the GOSH magazines which will be out in July and they hope they will coincide with the airing of our episode.

At our most recent GOSH appointment Dr Waseem was very happy with his progress and how he looked. However his weight had dropped again and he was still concerned that there may be some mild gut GVHD that we needed to gain control of. GOSH weight was 24kg , still 4kg more than this time last year and 2kg more than when he left GOSH last July.
The great news was that finally, a year down the line, his CD4 count is over 250. It was 350 in fact which was great considering he is still on immunosuppression. The lump on his neck seemed much the same he thought but he felt it was possibly harder which was a good thing. It shows the graft is active and targeting previous damaged areas and collecting dead mica-bacteria. The plan was weigh him at the JR in two weeks and see if we can get him to gain or stay the same weight. He told us to try to feed him. We came out and Herbie said ‘I’m starving!’. So we went to the lagoon where he ate burger and chips!

Herbie also made the local paper again! Thankfully it was nothing to do with his BMT. He had  a First Aid Day  at school and he totally tricked me by coming home with a bloody bandage on his leg. Imagine my horror as he limped up the drive with Dan behind him.

Little devil really kept up the pretence too! 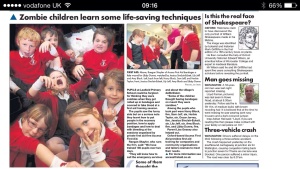 I am starting to gear up to return to work soon too. It’s been some time but I’m looking forward to returning. It will be nice to allow time to think about other things.

So as all of our BMT buddies hit their 1st year milestones we all head into the unknown of year 2. For some life has found it’s way back to some normality, for others new challenges have arisen but we are all grateful for being able to be here a year on with our precious children and to still share this journey together.

I’ve always said that we took the scenic route through BMT, we’ve climbed hills, we’ve crossed bridges and we’ve travelled through dark tunnels but right now we seem to be on a pretty even , albeit it winding, coastal road, the wind blowing through our hair, a sense of excitement that we are so close to good things that we can smell it!  So near to our destination as the crow flies, but you know us, that would be dull right? Do you know what, right now dull sounds quite appealing! 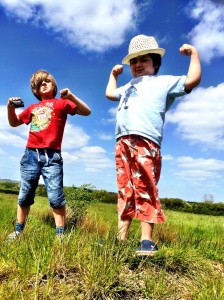 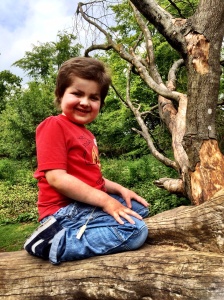